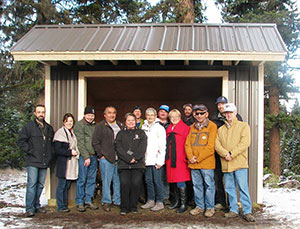 The Gold Rush Snowmobile Trail currently runs from 70 Mile House to Horsefly and is based on ancient trails, old logging roads and with some overlap on the Cariboo Waggon Road. This community-based initiative began 20 years ago and kicked into high gear in 2009 when the District of 100 Mile House and NPTGS secured provincial and federal government funding to clear the existing legally established portion of the trail of blown down and dead and dying mountain pine beetle infested trees.

Since then, work has continued to transform the route into an all-seasons trail. Now, a variety of users can enjoy this multi-use trail that offers a variety of recreation experiences year-round. The family-oriented trail system can be used by other outdoor enthusiasts like hikers, cyclists, bird watchers as well as snowmobilers, making it a year-round tourism asset.

In 2011, the GRST Regional Management Committee development of a business plan for the trail. In 2012, the committee began implementation of the business plan using a phased approach concentrating initially on the 100 Mile House area. This phase connected existing trails already managed by local clubs and formalize legal connections to communities to permit access to services and amenities such as fuel, food and accommodation. Lessons learned from Phase 1 were applied to other sections of the trail and subsequent phases.