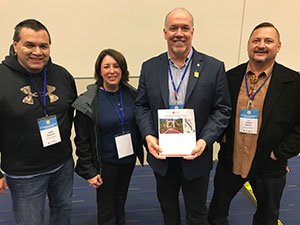 NPTGS has been working with the project lead Spuzzum First Nation since 2009 to save the historic 1926 Alexandra Bridge and develop the adjacent 55-hectare Alexandra Bridge Provincial Park site’s heritage tourism potential. The rocky narrows the bridge spans has been a transportation hub for 10,000 years, making it B.C.’s original Gateway Project. The area contains a wealth of heritage tourism assets and stories that span First Nations, Gold Rush and Chinese history. Two national railways embrace the site on either side of a spectacular canyon.

The project leads have built a broad coalition of partners and supporters. Partners include the Ministry of Transportation and Infrastructure (MOTI), BC Parks, the BC Heritage Branch, HeritageWorks/Heritage BC and CN. Supporters include numerous outdoor recreation, heritage tourism and other community organizations and businesses as well as civic governments, including the Fraser Valley Regional District. Premier John Horgan is also a supporter and a member of the Friends of the 1926 Alexandra Bridge Society.

The project partners have consulted with the community, local businesses, all levels of government and CN Rail to develop an exciting vision of the site’s potential. They’re developing a business plan and working closely with MOTI, which is responsible for the 1926 Alexandra Bridge. The project partners continue to work towards preserving and restoring the bridge, which is an icon of Canadian transportation history.

As part of their efforts to build public and political support for the project, the Spuzzum First Nation has held their First Fish Ceremony in their traditional territory at the Alexandra Bridge Provincial Park picnic area. This millennia-old ceremony gives thanks and shows appreciation for abundance of the natural resources that sustain us all.

The current phase of the project is focused on three main areas:

Restoring the bridge and revitalizing the park site tie in with development plans by the Spuzzum First Nation adjacent to Alexandra Bridge Provincial Park that include housing and a convention centre. As a package, the project and SFN development will create a major heritage tourism asset in the Lower Canyon, providing a gateway to the rest of the Gold Rush/Spirit Trails corridor to Barkerville. The campground component includes RV sites and other badly-needed amenities currently absent from the Lower Canyon. A business plan has been developed for this component of the development.