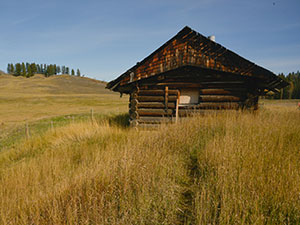 The Cariboo Waggon Road was a marvel of 19th Century engineering and a multicultural megaproject that defined modern British Columbia. It stretches from Yale in the south to Barkerville in the north, traversing 650 kilometers. Royal Engineers laboured side by side with First Nations and Chinese workers and gold seekers from around the globe to build it. To walk on it is to connect with the excitement of the Cariboo Gold Rush, fur trade era and millennia of First Nations trade and travel.

The Cariboo Waggon Road Restoration Project will restore intact, accessible sections of the road in communities from Yale to Lillooet to Barkerville. The project is being coordinated by NPTGS, which has in partnership with First Nations, communities and other organizations restored or built over 230 km of heritage trails since 2009. The project has the support of many partners, including the Cariboo Regional District, District of 100 Mile House, BC Parks and the Outdoor Recreation Council of BC.

GPS/mapping will be done in consultation with First Nations, communities and businesses. Consultations and information sessions will be staged to determine the nature/scope of elements like interpretive signage, amenities like picnic tables, outhouses and other facilities.

In addition, two community information meetings were held in Clinton and 108 Mile with a total of 60 people attending. Further contact has been made with all those who attended and a Facebook page has been created to keep interested parties informed and involved. Further meetings with individuals are planned.

The project has compiled a tremendous amount of information in a short time and the enthusiasm with which the initiative has been greeted by communities is overwhelming. Everyone at the community meetings had a personal story to tell about their connection to the CWR, whether it was an ancestor who has worked on the road itself or how they envisioned a restored road benefiting their local business. The task of gathering these stories and building these business alliances continues as the project moves forward.