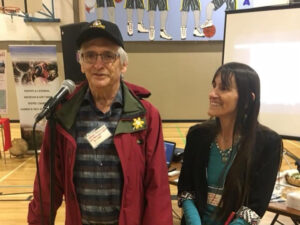 The New Pathways to Gold Society (NPTGS) is mourning the passing of beloved Co-Chair, Terry Raymond, who died on April 7 at Fraser Canyon Hospital after a long battle with cancer. Raymond was a founding director of the Society and became Co-Chair in 2011. Warm, gregarious and with boundless energy, he made a big difference in Indigenous and non-Indigenous communities.

“Terry was a colourful master thread woven into the lives of communities from Hope to Barkerville and especially his beloved Boston Bar,” said Cheryl Chapman, NPTGS Indigenous Co-Chair.

“He had a talent for bringing people together and making them laugh as well as work towards the common good. It was a privilege to be Co-Chair and fellow director with Terry and his passing has left a huge hole in many hearts, including our Board of Directors’.”

Raymond graduated from Boston Bar Secondary and worked as a paramedic. His involvement in the life of the people of the Gold Rush Spirit Trail was immeasurable. He was a Fraser Valley Regional District Director, Siska Traditions Society Administrator, Gold Country Communities Services Society and Gold Rush Trail Committee Director to name but a few of his offices. He was also strongly affiliated with the Boston Bar and Siska First Nations in economic development.

Raymond wore many hats, but the one he liked the most was a stylish top hat, which he wore in period costume at many an occasion as he showed his support for the values that defined him and that he infused into NPTGS: Reconciliation, compassion, building local economies through heritage tourism, Multiculturalism, creating a more inclusive narrative of our shared history and living cultures.

“Terry was upbeat and cheerful to the end, making jokes about the quantity of his hospital Jell-O on Facebook — which he hated, no matter the colour — and posting other humorous items to his page,” said NPTGS Secretary Brent Rutherford.

“He was also active in the Society’s business right up to the end and provided us with his wisdom and guidance. Our thoughts and prayers are with his family and loved ones.”

Both Chapman and Rutherford agree that Raymond’s legacy will live on through all the lives he touched and made better. His celebration of life will be held on April 23, 11:00 a.m. at Tuckkwiowhum Village.

The New Pathways to Gold Society is a community-based, non-profit organization committed to Reconciliation, building local economies through heritage tourism development and Multiculturalism. Established in 2007, the Society is celebrating its 15th year in operation.