The Songs of the Land project breathes new life into ancient Aboriginal music after a century of silence. 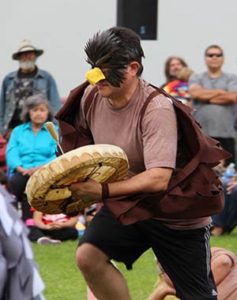 Kevin Loring participating in Battle of the Birds

Led by Governor General Award-winning playwright Kevin Loring, the project is bringing traditional Nlakap’amux songs and stories to contemporary audiences. The songs were recorded on wax cylinders near the beginning of the 20th Century by anthropologist James Teit. Originally from the Shetland Islands, Teit moved to B.C. in 1884. He married Susanna Lucy Antko, a Nlaka’pamux woman, and became immersed in First Nations culture.

At the time he made them, Teit’s wax cylinder recordings were state-of-the art. He captured sacred music like “The Shaman’s Song,” the work songs of Nlaka’pamux women and other traditional stories. After Teit’s death in 1922, the recordings were stored at the Canadian Museum of Anthropology in Ottawa. The recordings have since been digitally re-mastered.

Since 2013, Loring’s Savage Society theatre company, NPTGS and other partners have worked with the Nlakap’amux People, consulting with the community on the music’s artistic and spiritual importance.

Following a series of community workshops, the first play developed from the recordings, “The “Battle of the Birds,” debuted at the Lytton River Festival in 2015. The play won critical acclaim at the Talking Stick Festival in 2016. A second production, “The Boy Who Was Abandoned,” also debuted in Lytton in September 2016.

Loring notes that Teit, Antko and the Nlaka’pamux recorded these songs and stories at a time when the culture was being outlawed and stripped away. Loring continues to work with communities and his talented team of Indigenous artists to bring more of these songs and stories to life. Further funding for the Songs of the Land project has been provided by the Canada Council and the B.C. Arts Council.

The Songs of the Land project has produced two acclaimed plays in collaboration with the Nlakap’amux community: “The Battle of the Birds” (2015) and “The Boy Who Was Abandoned” (2016)

James Teit recorded hundreds of First Nations songs on wax-cylinders from 1897 until 1921, a year before his death

Four Nlaka’pamux women were singers and key participants in the recording sessions—one of them was Lucy Antko, Teit’s wife