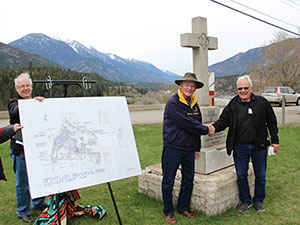 Chief Cexpe’nthlEm (1812–1887) of the Nlaka’pamux Nation was a visionary leader and a tireless advocate for peace in turbulent times. In 1858 when tens of thousands of gold-seeking miners flooded into his people’s traditional territory, conflict arose between the Indigenous Peoples of the Canyon and the newcomers. Villages were burned, an unknown number of people died and armed parties from both sides clashed in the Canyon. The conflict threatened to spread across the border into U.S. territory, which would have likely resulted in American military intervention and potentially the annexation of the B.C. Mainland before it could become a Crown Colony.

The courage and wisdom of Chief Cexpe’nthlEm convinced the people to choose the path of peace and in August 1858, he negotiated a peace with H.M. Snyder, an American militia captain, and ended the Canyon War. Chief Cexpe’nthlEm preserved the Mainland which would in time become part of Canada rather than the United States. In 2008, the Thompson River Bridge linking Lytton with Lillooet was renamed in Chief Cexpe’nthlEm’s honour. For the pivotal role he played in 1858, he also deserves to be recognized as a co-founder of modern British Columbia.

Currently, the memorial to this remarkable leader (known to non-Indigenous Peoples as Chief David Spintlum) is a relatively modest stone cross atop a concrete base on the grassy grounds of the Anglican Church complex of St. Barnabus, next to the Parish Hall in Lytton. The site is unfenced and without any interpretive materials other than the brief inscriptions on the monument itself.

The Chief Cexpe’nthlEm Memorial Precinct Restoration Project is a partnership between the Lytton First Nation, Village of Lytton, the St. Barnabas Parish (Anglican Diocese of the Cariboo) and NPTGS. The project will see this historic site fenced, landscaped and considerable interpretive signage installed.

In addition, a Chief Cexpe’nthlEm Memorial Plaza would be created adjacent to the memorial grounds, with amenities like benches, a gazebo and providing spectacular views of the Fraser River. It will also overlook the site where Harry Snyder and Chief Cexpe’nthlEm met to make peace in 1858.

The plans and artist’s concept were developed in 2009 by L.A. West Associates of Kamloops in

consultation with the Lytton First Nation and Village of Lytton with funding from BC Hydro.

The reinvented memorial precinct will also incorporate two plaques awarded to the Lytton First Nation, one of which is an Historic Sites and Monuments Board of Canada (Parks Canada) plaque commemorating Nlaka’pamux basket weavers. As well, it will incorporate the Chief Cexpe’nthlEm Centre Post, an original piece of Indigenous artwork by Hope B.C. artist Carl Stromquist (Spuzzum First Nation). This evocative piece of art is based on Chief Cexpe’nthlEm’s description of Kumsheen (Lytton) as his “centre post,” or central pillar of the Nlaka’pamux Nation.

The design was unveiled in 2018 at the NPTGS “10-plus” anniversary celebrations in Lytton to reignite the project, which had been on the backburner. Artists’ concepts of the plan were unveiled at the Spintlum Memorial itself by Cecil Salmon, a direct descendant of Chief Cexpe’nthlEm, and Dale Snyder, descended from H.M. Snyder.

reality, the project partners are committed to raising the required $900,000. They are working

resources required to build this fitting monument to one of B.C.’s greatest Indigenous leaders.