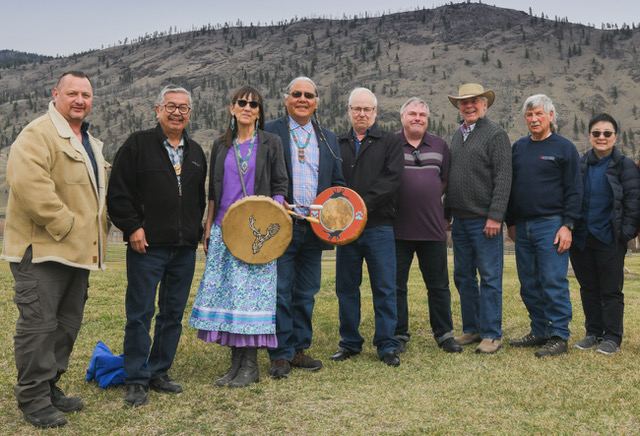 (HAT CREEK RANCH) The New Pathways to Gold Society (NPTGS) Board of Directors elected a new executive at their April 21 meeting held in the traditional territory of the Secwépemc People.

Brent Rutherford was elected Co-Chair, replacing Terry Raymond, who passed recently. Rutherford had been the NPTGS Secretary. Taking his position is Byron Spinks, who was the founding Indigenous Co-Chair in 2007 and has also served as a director.

Cheryl Chapman was reaffirmed as Indigenous Co-Chair. It was a somber meeting in light of Raymond’s passing. The well-known and loved Fraser Valley Regional Director and community activist had been Co-Chair since 2011.

“No one can really replace Terry,” says Rutherford. “But I hope that with the support of my fellow Executive and Directors, I can help carry on Terry’s legacy of working for Indigenous Reconciliation, Multiculturalism and economic development through heritage tourism.”

Chapman also paid tribute to Raymond, who passed away on April 7 after a long battle with cancer.

“Terry leaves a big hole in both our Society and in our hearts. But he continues to inspire me and the entire board as we move forward and honour his life work in the Indigenous and non-Indigenous communities in the Hope to Barkerville corridor and beyond.”

Chapman is a member of the Xat’sull First Nation and lives outside Williams Lake. Rutherford is a resident of Lac la Hache. Spinks, formerly Lytton First Nation Chief, currently lives in Boston Bar.

The New Pathways to Gold Society is a community-based, non-profit organization committed to Reconciliation, building local economies through heritage tourism development and Multiculturalism. Established in 2007, the Society is celebrating its 15th year in operation.